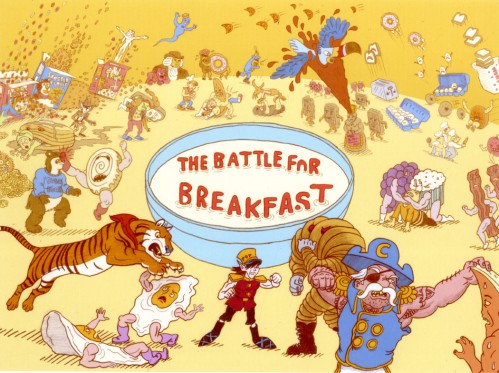 The battle for breakfast is a hard fought fight. Winning the hearts, minds, and stomachs of consumers is no small feat, so BIG FOOD manufacturers have to pull out all the stops. Unfortunately, kids get caught in the crossfire.

Kellogg’s Frosted Flakes is one of the biggest players in the kid marketing arena. Spending an estimated $20 million in advertising annually this pre-sweetened cereal powerhouse has an arsenal of marketing ammo aimed directly at our children. And who’s leading up the charge? That’s right, none other than Tony the Tiger.

Characters are a tried-and-true tool for marketers. They’re very effective at creating a vivid world for a brand to live in and tell stories. This is particularly useful when a brand has very few product benefits to talk about. Think back to the days of cigarette advertising–manufacturers used characters to create emotional benefits that were much more powerful than the brand’s product benefits (to learn so more about these marketing techniques, check out my post Happiness Is…). Two prominent examples were the Marlboro man who defined “rugged masculinity” and Joe Camel who embodied “cool.”

Are the characters targeted at kids any different? Defenders of marketing to kids claim animated characters are simple, harmless fun. Unfortunately, this couldn’t be further from the truth. These characters are not some random creation. Rather, they are a well-calculated assault on children. For any given character, millions of dollars has been spent on the following:

With the help of advertising agencies, research firms, and brand character specialists like Character LLC, Big Food companies launch advertising smart bombs, disguised as fun-loving characters, straight at kids. Is it a fair fight? I don’t think so, but let’s take a closer look at how it all comes together using Tony the Tiger as an example.

Created in 1952 by Kellogg’s ad agency, Leo Burnett, Tony the Tiger has become an iconic brand mascot. Named one of the Top 10 Advertising Icons of the 20th Century, Tony continues to lure kids into his sugared-cereal fold. Preying on children’s love of animated characters and their aspirational dreams of success in sports, Tony now assumes a coach-like role with Frosted Flakes as his suggested way to “power up” to play. With ads featuring baseball, football, hockey, soccer, and gymnastics, Tony has successfully linked Frosted Flakes to sports and athleticism. It’s almost as if Frosted Flakes is Tony’s secret training tool to become a great athlete.

Leveraging the “Earn Your Stripes” campaign that launched in 2004, Frosted Flakes has continued to build its sports-themed platform filled with promotions, tie-ins, and TV advertising. Yes, all guns are blazing and aimed at your kids. For example, this summer’s tie-in was with baseball and featured the following elements:

Let’s take a look at the TV Ad:

Steeped in the wholesome backdrop of little league baseball, it’s hard not to get sucked in and start whistling or tapping your foot to the catchy tune. But about midway through, Kellogg’s slips in their sell line, and it stopped me cold. In case you missed it, here it is: “Kellogg’s Frosted Flakes fuels little leaguers to be their best…” Really? So Kellogg’s is telling kids that Frosted Flakes fuels them to be their best? That sounds like crazy talk to me, but let’s first check out Frosted Flakes nutritional info to see if it can really live up to that claim. Here are my findings:

(1) Frosted Flakes’ nutrition profile reads more like a dessert than a nutritious breakfast. In fact, one 30g serving of Kellogg’s Frosted Flakes with milk has more calories and sugars than a Skinny Cow Ice Cream sandwich, and has over 20mg more sodium than a serving of Classic Lay’s Potato Chips (170mg sodium per 28g serving). 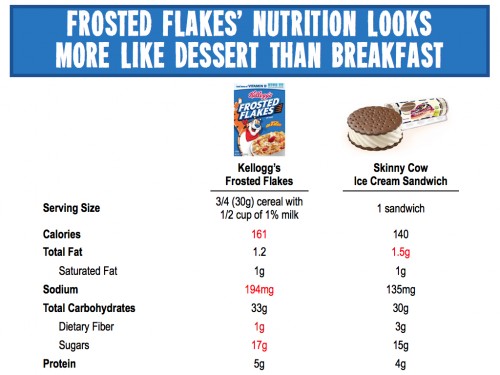 (2) Kellogg’s Frosted Flakes’ serving size is also unrealistically small. As the photo below demonstrates, a 30g serving of Frosted Flakes is tiny (just slightly bigger than the size of a tennis ball). Most kids consume 2-3 servings at one sitting. Can you see serving your child the equivalent of 2 or 3 ice cream sandwiches for breakfast or to “fuel them up” for the big game? Then why would you serve them Frosted Flakes?

(3) Frosted Flakes is the epitome of processed food with few if any “real food” ingredients.

Some of the processed “highlights” off Frosted Flakes’ label are:

So does Frosted Flakes live up to its advertising claim “fuels little leaguers to be their best”? No, I don’t think so. At best Kellogg’s can claim Frosted Flakes’ simple carbs will launch kids on a sugar-fueled roller coaster ride.

Unfortunately the story of unhealthy breakfast cereal advertising isn’t a new one. Back in the 1970’s cereals were so full of sugar that Saturday Night Live spoofed their advertising with a skit called “Mini Chocolate Donuts.”

[If you’re having trouble viewing it here, you can look for it on NBC.com ‘s website here.]

Although this makes for great late-night comedy, the sad reality is over thirty years later we have a serious obesity epidemic on our hands. The processed food industry has deflected blame, lobbied effectively, and continues to advertise to unsuspecting children. The American Academy of Pediatrics has spoken out against advertising to kids and has even suggested regulating “advertising and promotion of energy-dense, nutrient-poor food products to children.” But BIG FOOD balks at ANY regulation or voluntary guidelines. In fact, a recent Reuters new piece reports:

“Food giants such as Coca-Cola, Pepsi and Kraft and advertising companies successfully pressed U.S. regulators to acknowledge they may weaken proposed guidelines that bar junk food advertisements aimed at children and younger teens….

In an attempt to raise awareness of over three decades of broken promises The Prevention Institute has released a video called “We’re Not Buying It” that debunks the Food Industry’s claims that it’s trying to be part of the solution. Take a look at it here:

What do you think? Do you trust BIG Food companies with our children’s health? And why do food companies’ rights to market unhealthy products to our children trump our right to raise healthy kids who aren’t exposed to junk food marketing? It seems like profits are prioritized over our kids, doesn’t it?

NOW is the time for us TO ACT AND TAKE A STAND! The decision on whether to move forward with voluntary guidelines on advertising to kids will be made in the next few weeks. We only have a SHORT TIME to make a difference. If you believe our kids’ health is more important than food company profits, click here to read The Prevention Institute’s online petition to President Obama. Then SIGN the petition and SHARE it with your concerned family members and friends. Together, let’s gather over 100,000 signatures. Not only can we do it, we have to! Our children’s health depends on it!

For my part, I will continue to call out Big Food and their harmful marketing tactics against kids in a new series of blog posts called, “Kid Marketing … It’s Just Not a Fair Fight.” Change is already on the way, there are some food marketing firms that are trying their best to show the importance of healthy food. If you have any suggestions of products or advertising for me to review, please email me or leave a comment below. 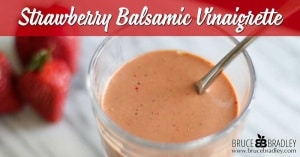 Confessions of a Former Coke “Addict” 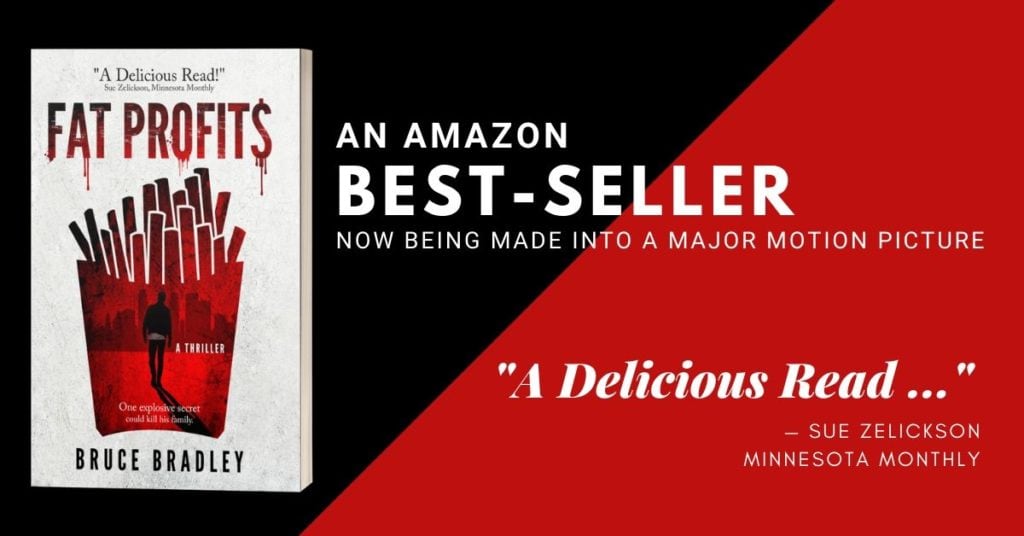