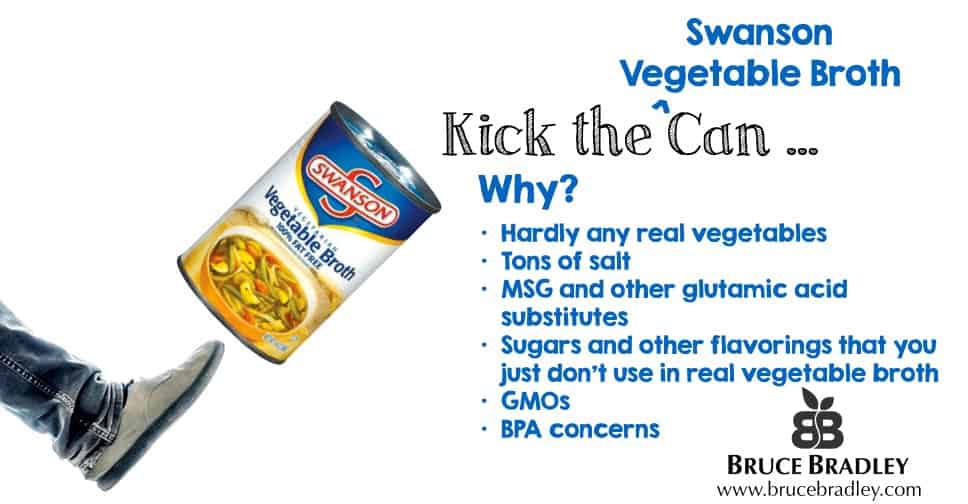 Kick the Can … Swanson Vegetable Broth

So many delicious foods begin with a flavorful broth. But are all broths created equal? Not really, and this is especially true in the world of vegetable broths.

Swanson, a brand owned by the Campbell Soup Company, is the market leader when in comes to all different kinds of soup broths including vegetable. But if you haven’t looked at their label in a while, you might be surprised with what you find: 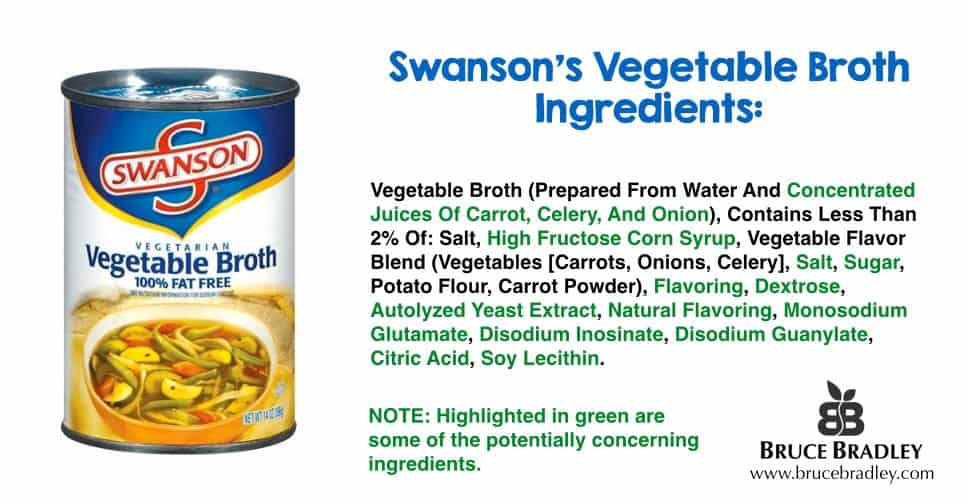 Very few vegetables: It’s pretty shocking but cooked vegetables like carrots, onion, and celery fall into the “Contains Less Than 2%” category on the label. Instead of using lots of real vegetables, Swanson takes the cheap route and flavors their vegetable broth with concentrated vegetables juices. Sound anything like homemade? No!

Tons of Salt:  It’s no surprise that there’s salt in vegetable broth. It’s a pretty common ingredient in even homemade broth. But Swanson packs 800mg of sodium in 1 cup of broth—that’s over a third of the daily recommended intake of 2,300 milligrams. It’s also about 4 times the amount of salt in my homemade vegetable broth. So what does that tell me? When matched up with the meager vegetables in their ingredients, Swanson broth is really more like flavored salt water than a true vegetable broth.

High Fructose Corn Syrup and Sugar:  I’ve made vegetable broth for years, and my homemade recipe has never called for sugar and certainly no high fructose corn syrup. While there isn’t much of either of these ingredients, their presence on the ingredient label reinforces the idea that Swanson Vegetable Broth isn’t getting the majority of it’s flavor from vegetables, it’s getting it from salt and some sugar.

MSG and Autolyzed Yeast Extract:  MSG is a common flavor enhancer in soups and many savory foods. It enhances the umami, savory flavor of foods by stimulating glutamate receptors on our tongue. While glutamates are naturally present in many foods, MSG and other chemically produced look-a-likes such as autolyzed yeast extract are typically inexpensive, highly processed ingredients that try to give flavor to otherwise tasteless food. While the FDA says MSG and many other chemically produced glutamates are safe, some people report negative reactions to these additives.

Lots of Flavorings: I’ve never had to add flavoring to any homemade broth I’ve made. The fresh ingredients are what drive the flavor. But in addition to the salt, sugar, and MSG, Swanson also feels it’s necessary to add “flavoring” and ” natural flavoring.” What are these flavorings? Who knows. While they could be fairly innocent, these days even natural flavorings can be suspicious.

GMOs:  If you’re trying to avoid GMOs that’s one more reason to avoid Swanson vegetable broth. Between the high fructose corn syrup, sugar, dextrose, citric acid, and soy lecithin, there are bound to be genetically modified organisms in this broth.

BPA concerns: Bisphenol A (BPA) is a hormone-disrupting chemical that in very small amounts could lead to behavioral problems, obesity, heart attacks, early puberty in girls, infertility, type 2 diabetes, and even breast and prostate cancers. While Campbell’s and most major soup manufacturers have pledged to phase out BPA, they haven’t been very forthcoming on the details. After recently inquiring about BPA in its cans, Campbell’s responded with the following statement: “The current can packaging used for our products is one of the safest packaging options in the world. We also recognize that there is a debate on this topic and some consumers want us to use other materials in our packaging. The trust of our consumers, which we have earned for over 140 years, is paramount and we intend to keep it. For these reasons, we’ve already started using alternatives to BPA in some of our soup packaging, and we’re working to phase out the use of BPA in the linings in all our canned products.” Campbell’s pledged to remove BPA from its cans in March 2012, and almost two years later they appear to still be dragging their feet.

Now to be fair Swanson does have a couple other varieties of vegetable broth which aren’t packaged in cans, have no BPA concerns, and don’t have quite as many additives, but even Swanson’s certified organic vegetable broth that’s packaged in aseptic cartons uses concentrated vegetable juices, yeast extract, sugar, and lots of salt.

So what’s the answer? While personally I try to make my own vegetable broth, there are plenty of store bought alternatives that can do the trick. For example, here’s the ingredient list for Pacific Organic Vegetable Broth: 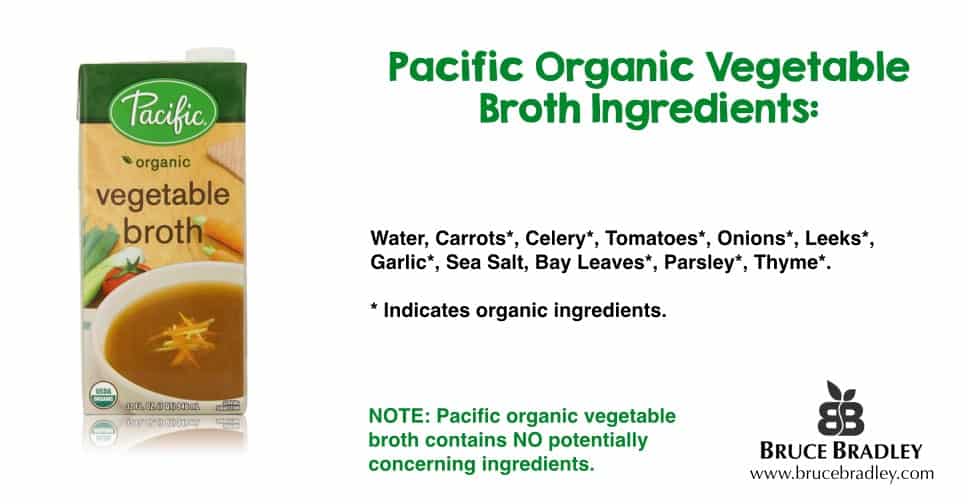 Isn’t this the kind of ingredient label you’d expect when you buy vegetable broth? Not only does this go to show that it’s possible, but brands like Pacific hit home the point that Swanson’s vegetable broth is largely flavored by everything except vegetables.

So, kick Swanson vegetable broth to the curb, choose a brand that uses real ingredients, or stay-tuned for my next post where I share my easy, homemade vegetable broth recipe. Not only is it delicious, but it’s also a great way to use up vegetables from your refrigerator or freezer before they go bad! And I use it as the base for my favorite Hearty Homemade Vegetable Soup! 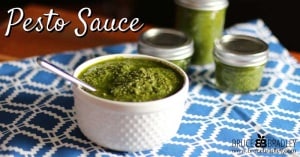 In the Beginning … You Have to DIVE IN 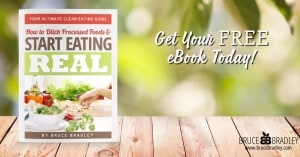 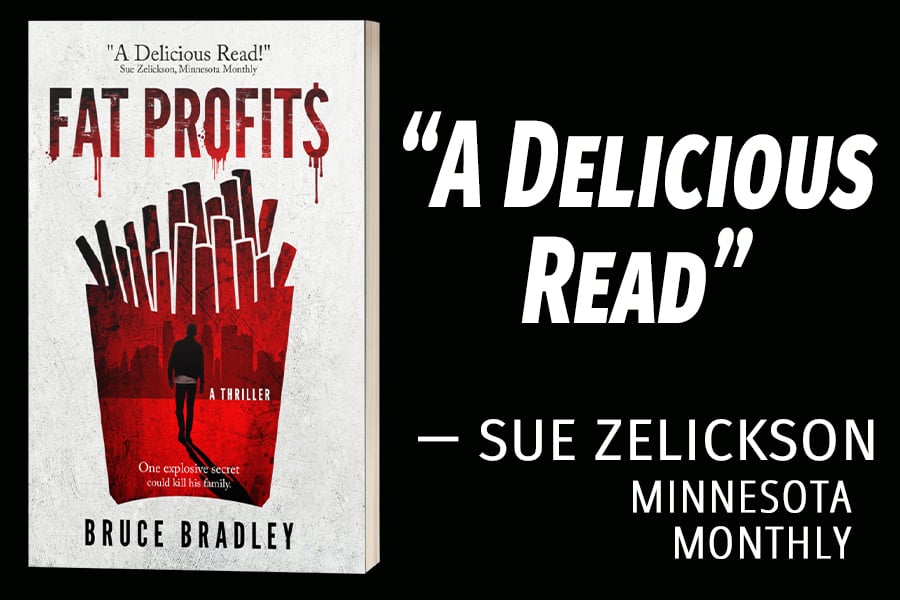